A Riverview teacher made it well-known that he would not participate in the February Hug Day events. However, a few high school students attempted to embrace him anyway and the popular high school teacher’s job was left hanging in the balance after one of the students alleged he assaulted him. 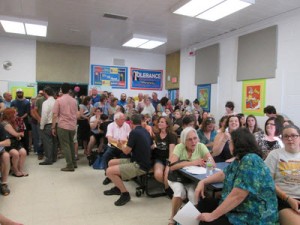 After criminal charges were dropped two months before, the district board announced that a special meeting would be held for the purpose of “employee discipline/tenure matter.” A crowd of more than 200 avid supporters attended. As reported by a local television station, thunderous applause and cheers broke out when it was announced that he was not being fired after an agreement was reached between the board and the teacher’s MEA-provided attorney.

One thought on “Teacher uncomfortable with “Hug Day” declines, but faces tenure charges after struggling with insistent students.”