Skip to content
HomeLife without MEA? See it now – in Wisconsin

MEA is the only organization with enough people behind it to resist the move to cash in on the $14 billion a year spent on public schools. This is why we’ve been under attack for so long: the corporations behind the Mackinac Center want us out of the way so they can monetize the public schools through vouchers and on-line schools.

When bargaining is outlawed, it is sometimes replaced by an institutionalized version of collective begging, usually called “Meet and Confer.” Here’s a Meet and Confer notice from a Texas school district website:

Meet and Confer is usually formalized into scheduled meetings, as they are in Janesville, Wisconsin:

5 minutes set aside for listening to Health and Dental coverage concerns.

In Wisconsin, the repeal of the collective bargaining law left just one subject bargainable: wages, and even then only up to an inflationary increase. As a result, contracts in that state can run a single page: 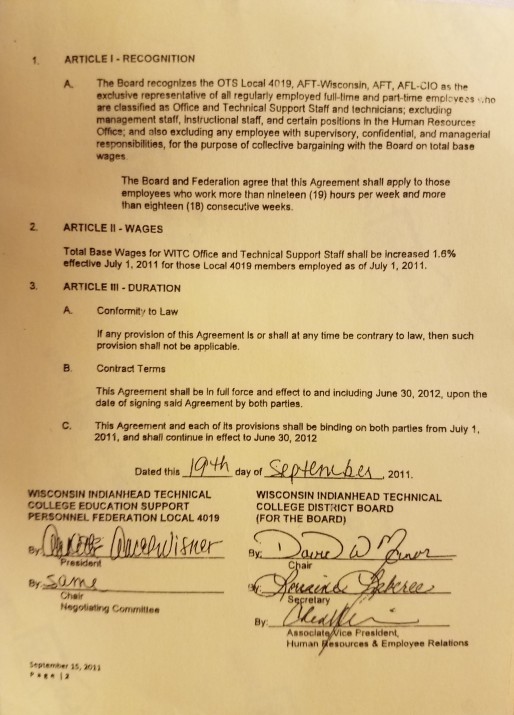 There are currently 300 schools, mostly religious, that receive vouchers in Wisconsin. Voucher programs were expanded in 2011 after the bargaining ban took effect and funding for them is expected to grow.

The lesson here is that the long range well-being of your students, your schools and your career depend on resisting the push to weaken your union. Remain an active member. Tell this story.  Follow MEAMatters on  Facebook and Twitter. Friend MEA on Facebook and on Twitter.

And get politically active. Activism is growing every day. Sign up for MEA’s Capitol Comments. When the call comes to fight legislation, make the call and write the letter. In the next election cycle, knock doors and make phone calls.

One thought on “Life without MEA? See it now – in Wisconsin”