The Mackinac Center has long complained about the misuse of school resources. When campaign material was sent to school email addresses, they were outraged.

They complained in another case that “It’s just wrong for government to use taxpayer resources to promote one point of view,”

The Mackinac Center’s justification has always been that spamming school email accounts isn’t illegal because it’s not political. But the truth is that the aim is to reduce MEA membership to clear the political field for their ultimate goal: allowing corporations to monetize public schools. For-profit charter schools, on-line schools, whatever it takes.

But this summer’s emails are different. Notice at the bottom: 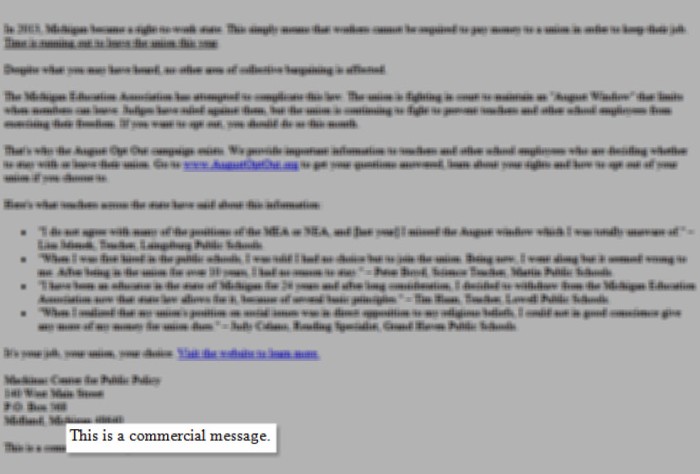 “This is a commercial message.” This phrase is added to avoid FCC rules that bring these emails into the CAN-SPAM law (Controlling the Assault of Non-Solicited Pornography And Marketing Act).

Violations of this law include a fine of up to $16,000 for each email. But as an “email marketing” (spammer) website says: “Fortunately, being in compliance of CAN-SPAM Law is quite simply [sic] if you follow a few basic rules.” Including adding that phrase.

Because this law was so easy for spammers to evade, the Telephone Consumer Protection Act (TCPA) was adopted. But this one isn’t so easy to handle. It covers email spamming to cell phones, and as the FCC site simply says, if you haven’t given prior written consent to getting this spam on your phone, you can file a complaint:

One thought on “The Mackinac Center Resorts to Spam. Again.”