The Mackinac Center is about to begin a summer-long push to again convince union members to quit. Last year’s campaign featured an unprecedented barrage: 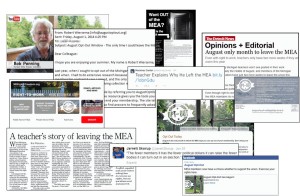 The Center will likely again suggest that it only wants to make sure members know their rights, that they care only about worker freedom.

A similar cover story for this summer is already coming together. This time it’s called “Worker’s Choice.” This Madison Avenue labeling is meant to market a proposal that would allow union-hating superintendents to grant sweetheart deals to non-members. Current law requires that unions bargain for all employees whether they pay dues or not.

This change to the exclusive representation requirement will be offered as an answer to the freeloader problem: nonmembers who benefit from bargaining, bargaining that is paid for by dues-paying members.

But the Mackinac Center knows full well what will happen: nonmembers, particularly those that love to lecture others about their union, will be awarded better pay for stiffing the union. The hope is that their windfall will generate a flood of union resignations by others hoping to cash in.

But of course once the union is disabled, the administration can unilaterally impose whatever it wants. Who would doubt they would do just that?

This brings to mind teaching in Texas. In Texas, where collective bargaining is actually against the law, school administrations instead allow what’s referred to as “Meet and Confer.” From a Texas school district website:

An example from Wisconsin, where school staffers get just 5 minutes to plead for better healthcare: