Skip to content
HomeA Blatant, Repeated Lie Designed to Get You to Quit

The MEA does not spend member dues on political campaigns. 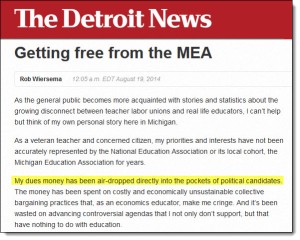 The Mackinac Center knows this. It also knows using member dues for political campaigns is illegal and if any organization ever wanted to see the MEA charged with a crime, it’s the Mackinac Center. So the fact that no complaint has been filed ends the question of whether campaigns get dues money.

But they and their surrogates continue to tell this knowing lie. Most recently in an Detroit News Op Ed, Getting free from the MEA, written by Allegan County teacher Rob Wiersema:

My dues money has been air-dropped directly into the pockets of political candidates.

Wiersema has long had it in for the union. Last summer, during the Mackinac Center’s Please Do Us a Favor and Quit Your Union campaign, Wiersema argued in another Op Ed that you should lose your salary schedule:

The step scale system also distorts the true market value of teachers. Most of us, including myself (sic) are paid above market value…Because wages are high, districts must restrict the number of teachers hired.

Wiersema is not some lone advocate. He has long served as a mouthpiece for the Center and spends his summers speaking on their behalf to defund the MEA.

Propagating this lie and working to reduce the advantages unions can provide for their members is standard procedure for the Mackinac Center. But then it would be for an advocacy organization that parades as a research think tank. Their very existence is premised on a lie.

One thought on “A Blatant, Repeated Lie Designed to Get You to Quit”