The march toward the corporate takeover of the US government is well underway. In 2012, Charles and David Koch established yet another political group, Freedom Partners. It was organized under IRS §501c(6) as a business league. An example of another 501c(6) is the NFL.

Freedom Partners is essentially a corporate politician buying club, where vast amounts of money is assembled and doled out to a long list of Super PACs and various right wing operatives. The advantage for the member corporations is that like a 501c(4), Freedom Partners can directly engage in politics. Unlike a 501c(4), contributions are tax deductible. Money is effectively laundered through a tax-deductible business league into non-deductible 501c(4) political non-profits.

Politico reports that among the groups being funded are:

In January, we learned that the Kochs plan to use Freedom Partners to spend $889 million in the next election cycle. That amounts to more than both of the (formerly) major political parties spent in the last cycle.

“It’s no wonder the candidates show up when the Koch brothers call,” said David Axelrod, a former senior adviser to Mr. Obama. “That’s exponentially more money than any party organization will spend. In many ways, they have superseded the party.”

There is reason to think the Koch’s preferred candidate is Scott Walker, but they have since promised to fund 5 Republican candidates: Walker, Jeb Bush, Ted Cruz, Rand Paul and Marco Rubio, 4 of whom (not Bush) attended the Koch winter donor meeting in Palm Springs. Charles Koch later promised to intervene in the Republican primary only if one of these candidates isn’t poised to win. In any case, Freedom Partners is certain to fund a barrage of anti-Clinton ads starting after Labor Day.

A Koch briefing document recently surfaced. This secret “Partner Prospectus” (“Please do not disclose, discuss, or disseminate the contents herewith.”) is handed to prospective funders and spells out the AFP plans for 2015, as well as the states they intend to focus on (Michigan is not on the list). It also details the technology they have employed in the field and what they have christened the “Structure of Social Change,” the overall plan to convert state and local governments to corporate surrogates. 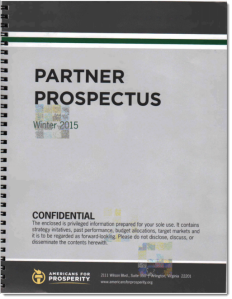 This involves funding university programs to produce pro-free market data, which is used by Koch-funded think tanks including the Mackinac Center, to “produce policy white papers.” These “wonky” ideas are transformed by AFP “into relatable educational materials” that they “distribute to citizens and lawmakers,” elected with Koch backing “ … who enact policy.”